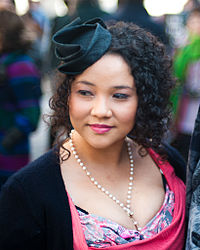 Mich Dulce (born Michelle Dianne Lopez Dulce on May 8, 1981) is a Filipina fashion designer, milliner, corsetiere, actress and vocalist of bands Death By Tampon and Us-2 Evil-0.

She graduated from the Poveda Learning Center in Quezon City (now St. Pedro Poveda College), and attended the Ateneo de Manila University where she earned a college degree in Bachelor of Arts in Interdisciplinary Studies and Communications Track. She worked with professional designers like Jessica Ogden, Marjan Pejoski and Cecile Zamora. After college she attended some short-Summer Courses at the London College of Fashion and Central Saint Martins College of Art and Design both in London.
She returned to the Philippines to pursue further studies in design at the University of the Philippines and the Philippine International School of Fashion. In 2004 she went to the United States to study Merchandise planning at the Fashion Institute of Technology in New York.
In 2005 she opened Store for All Seasons with Cecile Zamora.
In 2006, Dulce was one of the 14 housemates of ABS-CBN's Pinoy Big Brother: Celebrity Edition. She left the house after suffering asthma brought on by anxiety attacks and was treated at the Philippine Heart Center. She was evicted after she opted not to return to the BB House within the requisite 24 hours, on medical advice.
She is popular for her bespoke hats and corsets, as well as her bespoke bridal gowns

In 2002, Mich was a finalist for the Paris Young Designer’s Competition and 1st runner up in the MEGA Young Designer’s Competition. In 2004 she was nominated for Revolutionary Designer of the Year at the MTV Style Awards, and in 2007 she won the Fashion Designer of the Year Award for Streetwear at the MEGA Fashion Awards.
In February 2010, Dulce won the prestigious International Young Creative Entrepreneur (IYCE) award for Fashion at London Fashion Week.