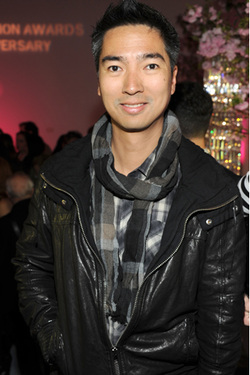 Ramon Felix Totengco, more popularly known as Rafé Totengco, is a New York-based Filipino fashion designer who specializes in women’s handbags, shoes, and small leather goods, and men’s bags and accessories. In the late 1990s and through the 2000s, he garnered a number of awards for his designs.
Career

He grew up in Bacolod City, Philippines. Even in elementary school, he began modifying his school uniform and going to tailors to have new clothes made for himself and his friends and family. Most Filipino fashionistas remember Rafé for Schizo, a clothing and accessories business under Sari-sari store. He was only 18 then and with no formal training in fashion. Unsatisfied he wanted to expand his horizons and soon enough, he went to New York where he enrolled in FIT (Fashion Institute of Technology) evening school in fashion while supporting himself as a design assistant.
In 1996, he produced his first accessories (skinny mod belts) for a SoHo boutique. One year later, the first collection of Rafé New York handbags debuted at Bergdorf Goodman. Since then, Rafé has worked in New York City. He started Rafé Studio Ltd., in 2000 and Rafé products are now distributed at department stores and boutiques worldwide, as well as through his own ECommerce site, and select online shopping sites.The Rafé collections have broadened over the years to include women’s handbags, shoes, and small leather goods, as well as men’s bags and accessories. Recently, Rafé was asked by Target as the first designer to create a capsule accessory collection for this mass retailer.