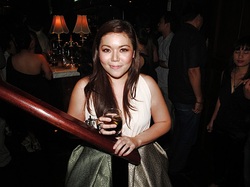 Sassa Jimenez (born December 17, 1987) is a fashion designer from The Philippines.Her designs have been described as "frothy", "fun", "polished", "sleek", "sexy", sometimes "too busy", and inspired by "women of the '40s". She has had two fashion shows as part of the twice yearly Philippine Fashion Week.

Sassa Jimenez had her first fashion show as part of Philippine Fashion Week in November 2008. Philippine Fashion Week is a twice-yearly week-long event, first begun in 1998, showcasing local design talent and which has been "hoping to launch the distinct Filipino creativity to the rest of the world", according to Style Manila, a fashion website. Sassa Jimenez premiered a 45-piece clothing collection. One fashion reporter described her collection as "refreshing and feminine, with classic, clean lines and surprising twists. Her long gowns evoke easy sophistication with a delicate balance of streamlined hems and voluminous details."Another reporter wrote: "Very few established designers would create such a frothy, excessive confection, but in the occasionally bland local fashion industry, Sassa Jimenez is a breath of fresh air."Audience reaction was positive: "Young patrons filled the room and enthusiastically applauded nearly every complicated design that made its way down the ramp."The reporter elaborated: "Most of the designs were fun and frothy, with bright pops combined with dark hues—bubblegum pink, aqua, mustard yellow, hot pink and plum mixed with black, gray, bronze and ivory." Some designs were described as "too busy" and others looked like they "could have been purchased off the rack from local retail stores."One outfit was a "black-and-pink dress the model wore featured a balloon skirt and puffed sleeves in a dubious combination of wool and organza". Another fashion writer liked Sassa Jimenez's Tulle skirt.Another writer described a Sassa Jimenez dress as "a great Merry Christmas dress: perfect for drinking yourself silly and having your picture taken getting kissed under the mistletoe."
A business reporter in May 2009 asked her about strategy: "Why is Philippine Fashion Week a better platform for you, rather than showing independently without competing for attention from press and audience?" She replied "I think it’s a very good opportunity to be part of Philippine Fashion Week because you get to showcase your work alongside the country’s most talented designers. The talent pool is so diverse and dynamic, and it’s an honor to be part of that."


Jimenez's second show was also part of Philippine Fashion Week beginning in late May 2009.It was held at the Mall of Asia Complex in Pasay City, and showcased the clothing styles of approximately twenty top Philippine designers, including Sassa Jimenez.One fashion reporter describing the Sassa Jimenez holiday collection, called Revelation, focused on her use of fabric: "Every moment is reciprocated by the swishing of a skirt or a sudden gleam of light from a satin surface" with an overall look that is "polished, sleek, and sexy." Another fashion writer used similar words to describe the Sassa Jimenez collection: "The words polished and sleek perfectly describe this particular collection. Inspired by style icon Dita Von Teese and the women of the Forties, Jimenez has created the classic-with-a-twist look with her current pieces." A third fashion writer mentioned the decade of the 1940s: "The parallelism between the celebrated burlesque performer’s style and Sassa’s current pieces fit as perfectly as a form-flattering dress would. Dita dresses up like a screen goddess from the 1940s but in updated outfits that carry a fresh and modern feel. Sassa took this aesthetic and translated it into polished pieces that are totally wearable in today’s fashion clime."

Sassa Jimenez remarked about her designs:
"I wanted the pieces to be classic and timeless and have staying power like the little black dress in a woman’s wardrobe." About the design process, she said: "Design comes out when I’m extremely happy. It’s an emotional thing rather than seeing something that should inspire me. During the design process, I usually play around. Then there’s a moment when I find something that could work then I’ll build on that. It’s something random, which is what happens when you’re an artist and a designer.".She described her approach towards fashion: "Fashion isn’t about using clothes to cover up who you really are; it’s about wearing something that brings out your many dimensions, and being secure in all these aspects of yourself. I hope that Revelation will encourage women to make that switch in mentality."She said: "My vision is to create pieces that have global relevance. I see myself designing outfits that can be worn by anyone, no matter where they are in the world"and said "I want Filipino women to be more daring, to try out something different, and ultimately, to discover different dimensions of themselves through various types of clothing." She describes her style as "step-out fashion" and says "What you wear each day says something about you, and so every day, you have a chance to truly stand out. Filipino women have to know that."
Philippine fashion reporter Tessa Prieto-Valdes describes why she likes Sassa Jimenez's styles: "No one else has the same kind of dress. Her creations have so much drama happening in front and in the back. My look is photogenic from all angles." To a fashion reporter, Sassa Jimenez replied her ambition was to "create a whole new look for the women of Manila."


A reporter commented: "Burlesque goddess Dita Von Teese was the inspiration for Sassa’s holiday collection, with touches of wartime ’40s garb. Even the details of the hair and makeup had that touch of the ’40s. This young lady has quite a promising fashion design career ahead of her."Another fashion writer described the show as follows: "Sassa’s silhouettes are still classic and carefully structured to highlight the body, without constricting it like today’s ubiquitous bandage dresses do. She kept the waist as a permanent feature and played with the rest of the proportions. We saw ballerina-inspired tutus, asymmetrical hems, full rosette skirts, and minis mixed with feathered sleeves, ruffled necklines and sheer layers. She sent a gamut of gorgeous and irresistible dresses down the runway that started with strong, sophisticated black and red pieces, then capped off with softer, neutral and voluminous ones."
Sassa Jimenez attended "Designs Filipino," a preview of the retrospective collection of Filipino Zone designers, in June 2009.

Sassa Jimenez, in 2009, was only 22 years old. A fashion writer asked Sassa Jimenez about where she'd see herself in ten years. She replied: "I would love to find myself still in the fashion industry and still making beautiful clothes for women. I'd be shipping my garments to different parts of the world and jet-setting all around the world to do fashion shows. By then I would have opened up my flagship store and a larger showroom and atelier in Manila where women can buy my dresses, or have dresses made while being served tea and cupcakes by a butler. I dare to dream."